At the bottom of the world

“South Georgia lies within the Antarctic Convergence, close to the latitude of Cape Horn and over 700 miles east of the Falkland Islands, deep in the Southern Ocean. This island of outstanding natural beauty is 103 miles long and a mere 22 miles wide at its widest point. It is inundated with spectacular wildlife and is steeped in the history surrounding the whaling industry and of Sir Ernest Shackleton, who is buried there.
Dawn on the morning of the third of February was spectacular; we were treated with flat seas and an extraordinary light show through our cabin window as we approached Cumberland Bay, South Georgia.”

From an early age, Ashley Perrin was driven by a passion for Antarctica and South Georgia. She and her partner Merfyn have spent much of their time and career here while Ashley worked for British Antarctic Survey (BAS), and Merfyn working for the UK government.  They tied the knot in South Georgia and they share this special experience with us.

“On the anticipated wedding day, Ash and I were dressed in our wedding gear, black and white sailing gear.  Fairly typically of the southern ocean, a 90 degree wind shift and rapid increase in wind from a gentle fifteen knots to gusts of fifty knots came up. The experienced Expedition Leader, David Sinclair of One Ocean Expeditions onboard the One Ocean Voyager decided to call off the landing. It did cross our minds that we may have just seen our hopes of marrying in the pretty white church, dashed for the season. That might have been the case on any other occasion but while it had perhaps escaped our notice, it had not been missed by David Sinclair that there was an under-swell of anticipation amongst many of the guests onboard, with many looking forward to being part of the occasion.

On the next day, we had another attempt to land in South Georgia and succeeded. Ash and I marched ahead of the guests to the church to help with preparations for the service. We found nothing needed to be done; Vanessa and Kaylan (the hotel managers), had slipped ashore and in addition to their normal duties had taken on the roll of best man and maid of honour. With the help of registrar Sarah Lurcock the three ensured that all was ready. Music and speakers were in place, origami flowers distributed where they should be. 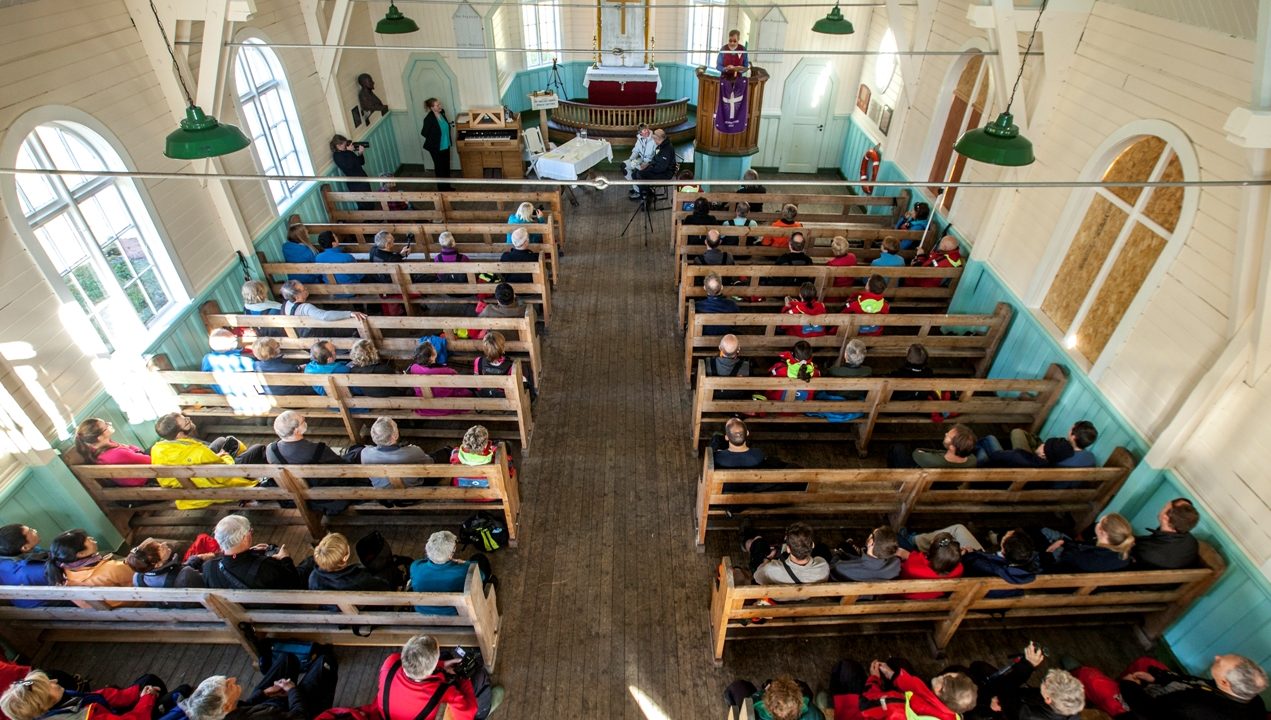 As soon as evryone assembled in the church, the bells chimed for the last time and to a recording of the Welsh hymn, Calon Lan, Ashley made the short walk down the aisle to the front of the church. After Sarah’s welcome, and John Dudeney’s – the ship historian –  reading of the Herbert Ponting poem ‘the Sleeping Bag’, it was the turn of One Ocean Expeditions’ assistant hotel manager Kaylan to wow the attended with her beautiful voice. Accompanying herself with the ukulele she sang her own version of the classic ‘I want to love you’ from Bob Marley.

Once outside, One Ocean Expeditions’ photographer extraordinaire Guts Swanepoel took over acting as the ‘official’ wedding photographer shepherding everyone into the front of the building for the group shot. More used to shooting wildlife around the globe, the United Nations reconnaissance photographer took on this ‘unusual’ role with grace, a smile and a good deal of laughter. This church front photo is something of a classic. Ash and I in our Musto sailing gear, the guests and One Ocean Expeditions staff in their landing gear jumping in the air with hands splayed. 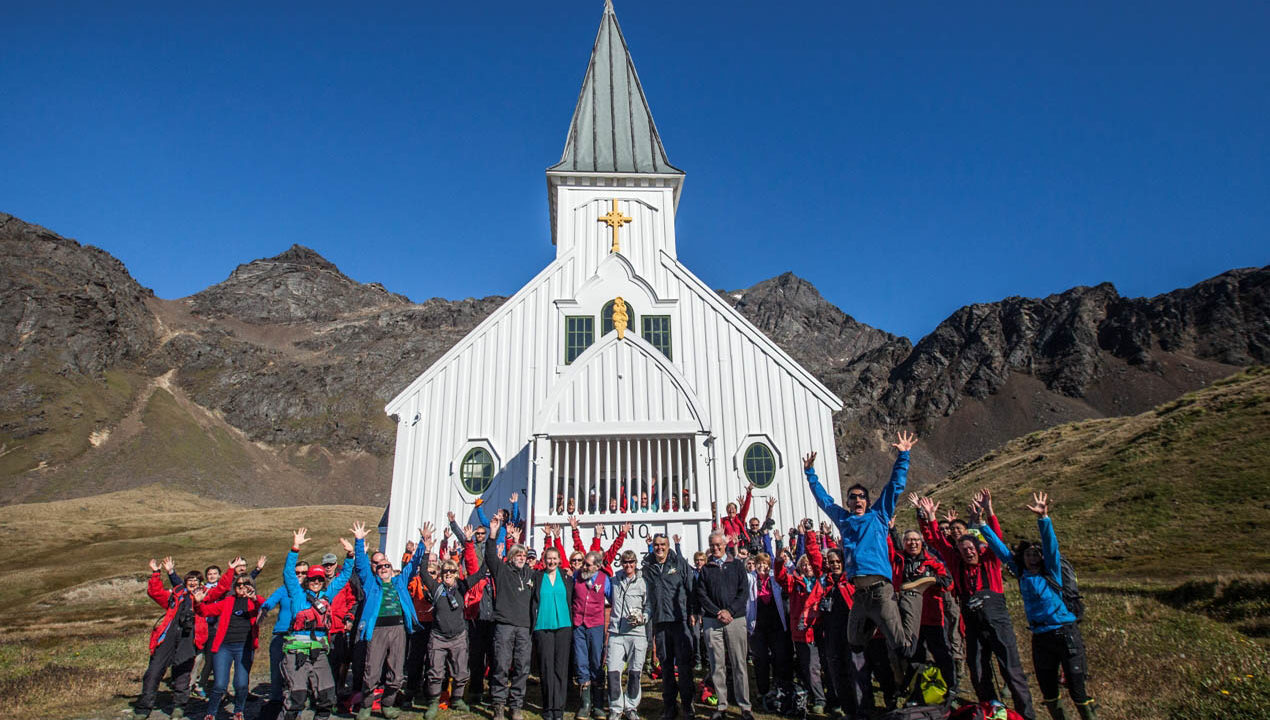 Once the ceremony was over, the ship steamed along the coast to St Andrews Bay.  South Georgia really turned on the weather, with crystal blue skies and light winds. With the forecast fair, we remained at anchor off the beach for the evening while we enjoyed a huge roast barbeque on the aft deck, with the Allardyce Range creating a stunning back drop. If the weather is kind the barbeque is a tradition on One Ocean Expeditions, what isn’t a tradition is the baking of a three tier wedding cake that was presented afterwards in the bar/lounge. All four passenger chefs were involved in the making of the cake over three days, fitting the extra work into their already long shifts. It was the climax of a day, where everything had come together seemingly effortlessly to create a fairytale event. South Georgia played its part with the weather and its unique backdrop, but the real thanks goes to One Ocean Expeditions and their magnificent staff. Without either, the day really could not have happened at all”. 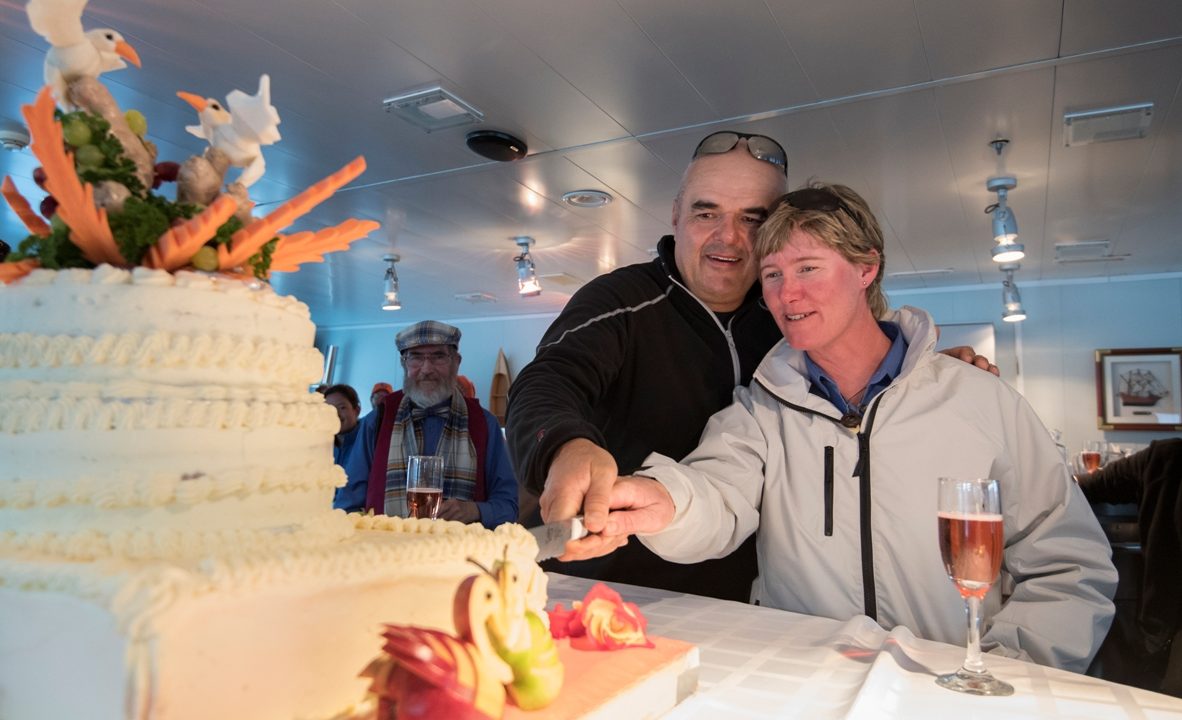 Looking for more information? Our agents have extensive experience and knowledge of the areas we visit. Speak with your travel agent to learn more.
Give us a call or send through an email.