In collaboration with the Vancouver Maritime Museum (VMM), we have developed a ‘traveling’ version of their exhibit that follows the journey of Captain George Vancouver when his ship was forced to stop in Valparaiso, Chile. Modified for our newest vessel, RCGS Resolute, by VMM Curator Duncan MacLeod, the exhibit tells the story of the British Naval Captain and his men as they were welcomed and entertained by the then-Spanish colony. 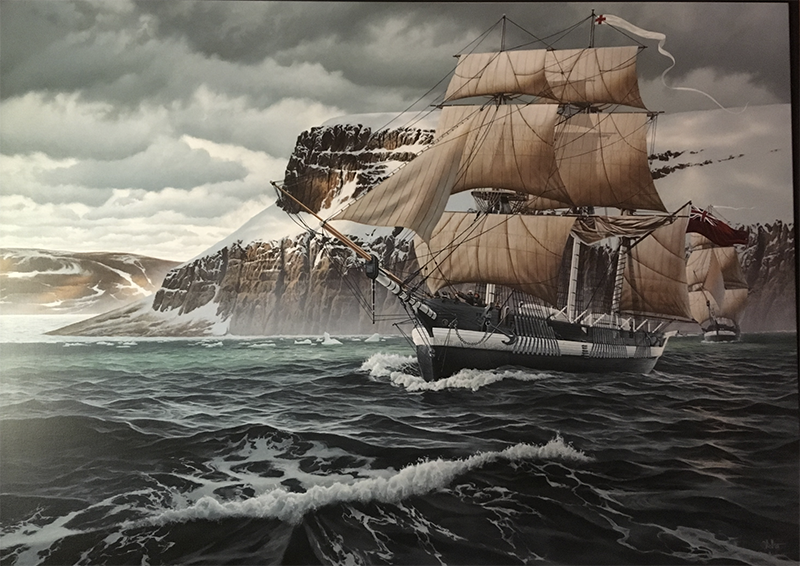 Dr. Katie Murray, Historian and Education Program Developer with OOE, has worked closely with VMM to create exhibits that enrich the onboard educational programming and guest experience. This particular display portrays how Vancouver and his men were shown hospitality by Santiago’s high society in what were historically turbulent times.

Also featured is information about biological specimens that were collected by the expedition’s surgeon and naturalist Archibald Menzies. The samples, including seeds from the ‘monkey puzzle’ tree, were later introduced to Europe and the Pacific Northwest, shaping the landscapes we see today.

“The exhibit tells an interesting story and provides a connection to OOE’s roots in the Pacific Northwest,” says Katie Murray. “It includes some fabulous historic images and maps, and with the initial Chilean Fjords Expedition itinerary ending in Valparaiso, the ship will sail the very same waters that Vancouver did in 1795.”

With Vancouver being a celebrated surveyor who created highly accurate charts of the Pacific Northwest as he searched for the Northwest Passage, his work was used as navigation tools for generations. Our staff will deliver a workshop, created in partnership with the VMM, teaching traditional navigational techniques to passengers including the usage of a sextant, compass and paper charts.

“Working so closely together with OOE gives us a great opportunity to share with so many people beyond the walls of the Vancouver Maritime Museum what our collections entail, what narratives we can tell based on our collections and expertise, and how we can make relevant to today’s world what has happened in the past.” says VMM Executive Director, Dr. Joost C.A. Schokkenbroek, PhD.

The exhibition was unveiled during the inaugural Chilean Fjords Adventure voyage which began on March 31st and will remain on display until July 31st, 2019. The exhibit is the first of many in a rotation that are being created by Katie through our onboard educational program, providing important historical information that will educate and entertain the passengers to give a deeper understanding to the regions visited.