Ah for just one time I would take the Northwest Passage / to find the hand of Franklin reaching for the Beaufort Sea / Tracing one warm line through a land so wild and savage / and make a Northwest Passage to the sea.

The lure of the Northwest Passage has proven to be one of the oldest and most persistent of passions, echoing from the heroic past of explorers such as William Edward Parry, Sir John Franklin, and Roald Amundsen, to those who seek to retrace their voyages today. There’s probably no place else on Earth where one can, as Charles Dickens put it, “pause on the footprints of heroic men,” seeing, very nearly, the same ice-chocked seas and stony cliffs that they witnessed so many years ago.

History in the North is both more fragile and more persistent than in more temperate climes — things decay very slowly, and though scattered may still be seen. When I guided a group of passengers from the Akademik Sergey Vavilov to the shores of Fury Beach, we could still see the remnants of Parry’s presence on the ground — barrel staves and hoops, and — at one spot — the rusted remnant of one of the enormous tins of beef with which he was supplied, still there nearly two hundred years later. It was if one could visit, say, Valley Forge, and find one of Washington’s soldier’s canteens still lying on the ground. These sites are fragile — as historians, we have to caution everyone to leave things in place — so that, the next time another group arrives, they too will see such sights.

It’s also often assumed that, given overall global warming, that ice will be less of an issue than it was in the days of the great explorers. If one deals in overall averages, that may well be true — but in the Arctic, it’s the particular that matters far more than the average. In 2018, for instance, there was less ice than the historical average in the western Arctic, but more than average in the eastern — so much more that we were not always able to land at our scheduled sites. This, too, is part of the essential nature of any Northwest Passage voyage — as we so often say, it’s not a cruise, it’s an adventure — the unpredictability is part of the allure.

And, although I come as a guide on these voyages, already steeped in history, I have always been very deeply impressed with the venturesome spirit of the passengers with whom I travel. They, too, have set aside other, easier itineraries — in Stan Rogers’ words, “left it all behind” — and chosen something far more strange and uncertain than a balmy tropical cruise. They bring such depth of feeling, such long-honed hope — that I feel honoured to be in their company. Last season, we were cruising up Baffin Island — which truly is a “Jewel of the Arctic” — but ice and fog conditions had kept us from shore for several days, and many passengers were feeling a bit restless. Some, though, found fresh resources in difficulty, and I joined with them: we dedicated ourselves to a vocal performance in the ship’s bar lounge. As we practiced our harmonies, someone asked, “what should we call ourselves?” “Fog and Ice,” came the wry answer, and so we were named. That night, as we sang “Northwest Passage” and “Frozen in Frobisher Bay” in four-part harmony, we — and all those there who sang along — made that Northwest Passage all our own. 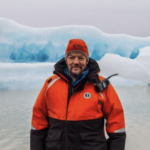 Russel Potter is among the foremost historians of Sir John Franklin’s lost expedition and those who searched for it. He has written extensively for more than twenty years about almost every aspect of the expedition: in his 2007 book Arctic Spectacles, on his “Visions of the North” blog, and as the founding editor of the Arctic Book Review. He also served as the featured on-location expert in the 2005 NOVA documentary, Arctic Passage, as well as a consultant for their 2015 documentary about the discovery of HMS Erebus, “Arctic Ghost Ship.” His latest book, “Finding Franklin: The Untold Story of a 165-Year Search“, was published by McGill-Queen’s University Press in September of 2016 and details the long and curious history of the search for Franklin. He also edited the late Garth Walpole’s “Relics of the Franklin Expedition: Discovering Artifacts from the Doomed Arctic Voyage of 1845“, which was published by McFarland in January of 2017.

If you would like to travel with Russel Potter in the Arctic, speak to your preferred travel agent or contact our sales team here.