Today is World Turtle Day and let’s be honest – who doesn’t love turtles?! There’s something about them – the way they glide through glassy waters with ease, munching on plants along the way. Or if you’re lucky, you’ll see them waddling up the beach, digging out their nests and laying their eggs during the night. What a joy to see the little turtle hatchlings emerge from their shells and scramble into the water.

Turtles migrate long distances between feeding grounds and the beaches where they are hatched. Some can swim more than 2,600 kilometres to reach their spawning grounds! They can live to be up to 80 years old and will return to the beach on which they were born to lay their own eggs.

Green Turtle
The green turtle is the largest sea turtle and the only turtle that is actually a herbivore. They will bite the tips off blades of grass, which actually keeps the grass healthy. One might think when trying to spot a green turtle to look for a green shell, but they are actually named after the green colour of their cartilage and fat. Some green turtle shells are so dark they are almost black. 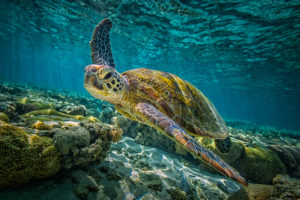 Hawksbill Turtle
The hawksbill turtle is identifiable by its sharp, curving beak and the pattern on its shell. Their shells can slightly change colour depending on the temperature of the water, and they are often seen on coral reefs and in shallow lagoons. Though they are omnivorous, sea sponges are their main source of food. 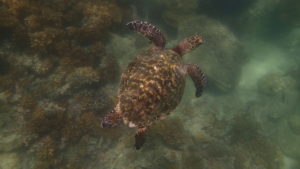 Passengers on One Ocean Expeditions’ inaugural Central America Adventure voyage had the pleasure of snorkelling alongside both green and hawksbill turtles just off of Coiba Island, and it was a trip highlight for many.

Both green and hawksbill turtles are both critically endangered due to hunting, loss of their nesting sites, being tangled in fishing gear and refuse and overharvesting of their eggs. It is illegal to collect, harm or kill turtles and many countries have laws to protect nesting areas. Turtles are known in some cultures to be a symbol of good luck and longevity.

For more information on travelling with is, please speak to your preferred agent or contact our sales team here.