One of the best things about travelling to the Arctic is the number of bird species we can see from the excellent vantage point of the vessel and from some of our key landing sites. All of our guests receive complimentary binoculars to use onboard, so everyone will have the opportunity to try their hand at birding. Thanks to Carina Gjerdrum and Sarah Wong, wildlife biologists who were kind enough to provide us with some in-depth information into four bird species we will be looking for in the Arctic.

The Northern Fulmar is one of the most abundant bird species to be seen in the Canadian Arctic, but we will not see many from land.  This species is more likely to be spotted out at sea where it will be on the search for a meal of squid or fish, gliding effortlessly into the wind just above the ocean surface. Fulmars vary in their appearance, from uniformly dark gray to mostly white with light gray upperparts, and are known to circle the ship looking to scavenge an easy meal.  One of Canada’s largest breeding colonies is in Nunavut, on Prince Leopold Island, where an estimated 16,000 pairs make their nests on the ledges of vertical cliffs.  Adults will take up to 100 days to raise their young, bringing food back to the nest from up to hundreds of kilometres away.  Young and old alike will leave their breeding colonies in September and head for ice-free waters further south.

In summer, the Thick-billed Murre is abundant over Arctic waters where they gather in the hundreds of thousands to breed.  They are stocky black and white birds, often seen flying together in lines near the surface of the ocean, or sitting on the water before disappearing below in pursuit of their fish and invertebrate prey.  One of the deepest underwater divers of all birds, the Thick-billed Murre uses its wings to descend to depths exceeding 100m and can remain underwater for more than three minutes.  Unlike other bird species, the Thick-billed Murre does not build a nest, but rather lays its single egg on a bare cliff ledge, the same ledge it will occupy for years to come.  Remarkably, after just three weeks, before the chick is fully grown, the male parent encourages the young bird to leap from the edge of the cliff and follow him to sea where the chick will complete its development and learn to catch fish on its own.  As winter approaches and the sea-ice expands, many of the murres abandon their northern range and head for the productive waters off eastern Newfoundland and Labrador.

This small gull species flies with great manoeuvrability in search for fish that is primarily seized from the surface of the water.  It is white with gray back and wings, and can be distinguished from other gulls by black wing tips that appear to be “dipped in ink”.  The largest Black-legged Kittiwake colonies can be found in the eastern Canadian Arctic on Coburg Island, Prince Leopold Island, and Cape Hay where narrow cliff ledges, at times no wider than 10 cm, provide a place for parents to build a nest platform.  Although up to three eggs may be laid, one to two eggs are more common, especially in years when food availability is reduced.  As such, Black-legged Kittiwakes are considered good indicators of ocean conditions as reflected not only in the number of eggs they produce, but also in the growth rates and success of their young.  Post-breeding birds from colonies in the eastern Canadian Arctic converge with those from Greenland and Europe to winter offshore on the banks and shelf edges of eastern North America.

As its Latin name Pagophila suggests, the Ivory Gull is an ice-loving species, breeding exclusively in oceans above the Arctic Circle and wintering near ice edges. We will be very lucky to see this rare but distinctive all-white gull, listed in Canada as Endangered due to an apparent 80% decline in their population size over the past 30 years. Unlike many other seabird species that like to nest together in large concentrations, the Ivory Gull nests in small, isolated colonies scattered across the Arctic landscape.  They build their nests in a variety of habitat types where they will be safe from terrestrial predators, including flat open surfaces, cliff faces, or nunataks (exposed peaks of rock projecting above the surface of the ice and snow).  The Ivory Gull is an opportunistic feeder, primarily catching small fish from the surface of the water, but also known to scavenge the carcasses of marine mammals killed by polar bears. We will look for this strikingly beautiful bird among the pack-ice where it is often found alone or in small flocks searching for ice-associated prey. 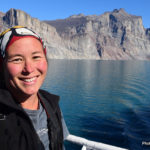 Sarah Wong is a Wildlife Biologist with Canadian Wildlife Service (CWS) in Nova Scotia, Canada. Sarah’s spent countless hours at sea conducting seabird surveys and her work the last six years aims to understand the distribution patterns of seabirds in the Arctic and Atlantic Oceans and evaluating the risks they face. Sarah is joining One Ocean Expeditions as an onboard researcher. In addition to infusing all passengers with a love of seabirds, she will be conducting seabird surveys for the Eastern Canada Seabirds At Sea (ECSAS) program, managed by Canadian Wildlife Service. These data will contribute significantly to ongoing monitoring efforts aimed at assessing the status and trends of migratory bird populations in the Arctic. Sarah is very excited about this collaboration with One Ocean and Acadia University. 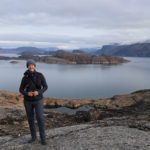 Carina Gjerdrum is a seabird biologist with the Canadian Wildlife Service (CWS) in Nova Scotia, Canada.  She has over 25 years of experience as a wildlife biologist, much of which involved prolonged periods in remote settings and challenging conditions.  Carina’s current position at CWS involves the coordination of a monitoring and conservation program for birds at sea in eastern Canada, including the management of the Eastern Canada Seabirds At Sea (ECSAS) database.  With the support of One Ocean Expeditions and Acadia University, Carina will be conducting seabird surveys through some of the most remote but important Arctic marine habitats. The data will help identify important marine areas for protection, identify and mitigate emerging threats, and understand the consequences of climate change on Arctic marine bird populations.