A NAME OF HISTORIC PROPORTION – RCGS Resolute was named by a select committee and the story of this name and its legacy is an interesting one.

Her namesake, HMS Resolute, was an exploration vessel specially fitted for Arctic service in 1850, complete with a polar bear figurehead. HMS Resolute was involved in two major searches for the lost Franklin expedition. The first, from 1850-51, was commanded by Vice Admiral Sir Horatio Thomas Austin, and explored the coasts of Bathurst, Devon, Melville, and Prince of Wales Islands, participating in the discovery of Franklin’s first winter quarters at Beechey Island. 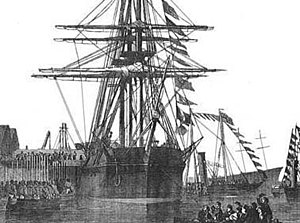 The second, 1852-54, was commanded by Nova Scotia-born Admiral Sir Edward Belcher. While it did not succeed in locating Franklin or his men, sledging parties from Resolute contributed to the further exploration of the high Arctic islands and in 1853 rescued the crew of HMS Investigator, a ship that was abandoned and lost during its own Franklin searches.

HMS Resolute, however, became trapped in the ice herself and was abandoned on May 15, 1854. Incredibly, the ship was eventually released, and drifted unmanned with the ice. She was discovered and extricated in September 1855 by American whalers. The ship was purchased by the U.S. government, refitted at the Brooklyn Naval Yard and sailed by the US Navy to England in 1856 where she was presented to HRH Queen Victoria as a “token of goodwill and friendship” from the President and People of the United States.

Two decades later, when HMS Resolute was decommissioned and broken up, the Queen ordered desks to be made from her sturdy timbers, and one of these was presented to U.S. President Rutherford B. Hayes in 1880 “as a memorial of the courtesy and loving kindness which dictated the offer of the gift of the RESOLUTE.” That desk has been used in the Oval Office by most U.S. presidents since John F. Kennedy and remains there to this day.

Resolute is of course also remembered by the name of one of Canada’s two northernmost Inuit communities, located on Cornwallis Island. The community of Resolute is a vital supply centre and is the base for much research in the High Arctic.

RCGS Resolute is the first ship to carry The Royal Canadian Geographical Society’s prefix – our exclusive marine travel partner. Born of a joint commitment to continue sharing Canada with the world, this historic partnership was established with the goal to expand both organizations’ capacity to experience and share geography, culture and education across Canada.

For more information on RCGS Resolute click here. If you are interested in travelling onboard this exceptional vessel, speak to your preferred agent or contact our sales team here.